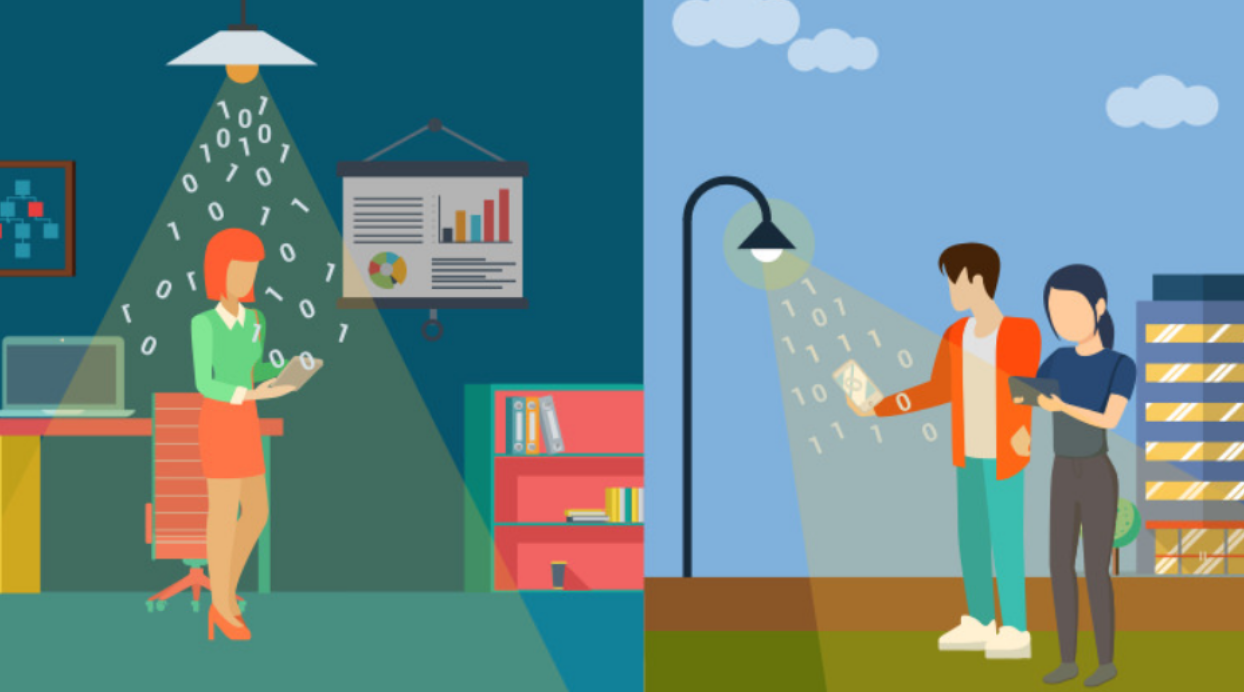 Article:
Li-Fi-light fidelity is similar to Wi-Fi technology and it is one of the future wireless communication technologies. The main feature of this technology includes fully networked, bidirectional and high-speed wireless. Nowadays, the most trending domain in wireless communication is Wi-Fi and internet users are also being increased every year. For obtaining better speed, efficiency, bandwidth, Li-Fi technology has evolved. The data transmission in this technology can be done using light because the light intensity changes quicker than the human eye for capturing. The range of data transmission in Li-Fi is faster 100 times than Wi-Fi.

Light fidelity (Li-Fi) refers to 5G visible light communication. It uses light from light-emitting diodes as a medium to deliver data to networked, mobile, high-speed communication in a similar manner as Wi-Fi. Li-Fi is used to off-load data from existing Wi-Fi networks. Li-Fi can be used as internet access points. To transmit information from one system to another system, it uses Visible Light Communication (VLC). This system is based on white LEDs using THz visible light spectrum in provision of both lighting and wireless access. Visible light communications (VLC) signals work by switching bulbs on and off.

Working:
The working of Li-Fi is very simple. There is a light emitter on one end i.e. an LED transmitter, and a photo detector (light sensor) on the other. The data input to the LED transmitter is encoded in to the light (technically referred to as Visible Light Communication) by varying the flickering rate at which the LEDs flicker ‘on’ and ‘off’ to generate different strings of 1s and 0s. The onoff activity of the LED transmitter which seems to be invisible (The LED intensity is modulated so rapidly that human eye cannot notice, so the light of the LED appears constant to humans), enables data transmission in light form in accordance with the incoming binary codes: switching ON a LED is a logical '1', switching it OFF is a logical '0'. By varying the rate at which the LEDs flicker on and off, information can be encoded in the light to different combinations of 1s and 0s. In a typical setup, the transmitter (LED) is connected to the data network (Internet through the modem) and the receiver (photo detector/light sensor) on the receiving end receives the data as light signal and decodes the information, which is then displayed on the device connected to the receiver. The receiver (photo detector) registers a binary ‘1’ when the transmitter (LED) is ON and a binary ‘0’ when the transmitter (LED) is OFF. Thus flashing the LED numerous times or using an array of LEDs (perhaps of a few different colours) will eventually provide data rates in the range of hundreds of Mbps.

Hence all that is required is some or an array of LEDs and a controller that controls/encodes data into those LEDs. All one has to do is to vary the rate at which the LEDs flicker depending upon the data input to LEDs. Further data rate enhancements can be made in this method, by using an array of LEDs for parallel data transmission, or using mixtures of red , green and blue LEDs to alter the light’s frequency, with each frequency encoding a different data channel. Kindly refer below block diagram for the same. 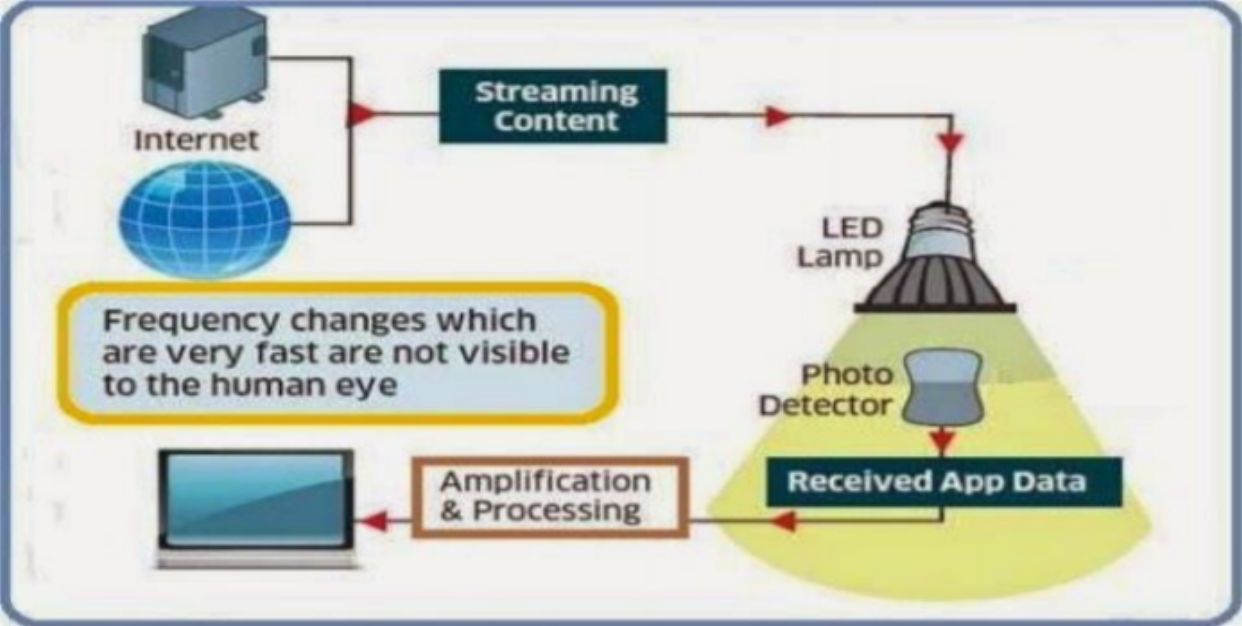 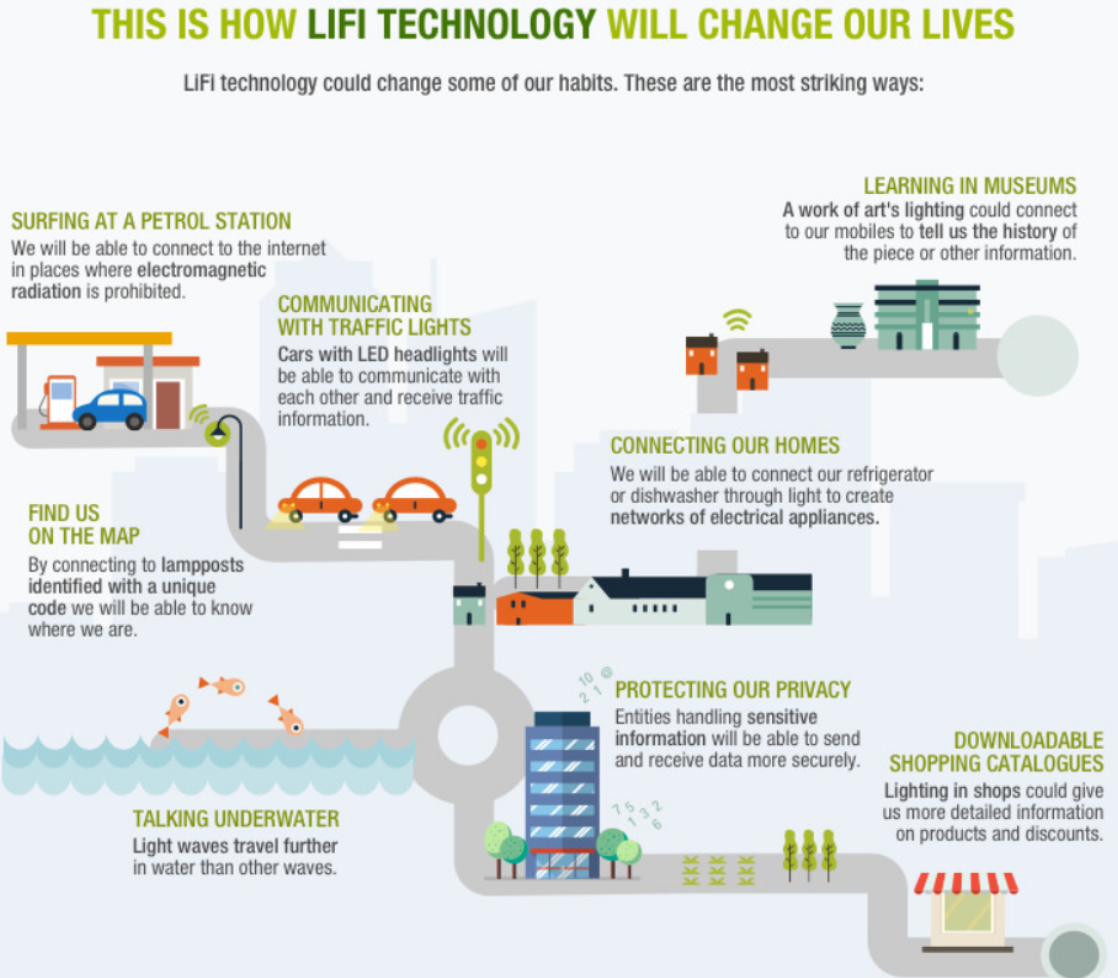 Li-Fi Technology Applications:
The Li-Fi router applications over Wi-Fi are promising as well as unlimited for the wireless communication which includes the following.